Let me be your fantasy – 5 reasons fantasy football rules

For UK sports fans, the words “fantasy football” might conjure up images of getting bulky envelopes sent to them in the post, spending painstaking hours juggling the team budget before posting back your selected picks to the newspaper running the league and checking nervously each week to see how badly you’d done. Others may start humming the opening tune in their head to the weekly show featuring Skinner, Baddiel and the dressing gown-clad Statto.

Although the English version of fantasy football originally involved a lot of manual  graft, it has now also found a digital home and is massively popular with UK football fans. However, the nature of the game dictates it is still largely a personal quest, trying to amass as many points as you can within a season to come out top of your league. Thousands of team owners have the same players on their squads as you do and bragging rights are won over your opponents exclusively due to team selection.

American fantasy football is a different animal though. With the majority of leagues having a relatively small number of participants – 10 or 12 being the norm – there is immediately a closer affinity between owners and a more direct sense of competitiveness. With most of the major media outlets having their own versions to entice players – including CBS, ESPN, Yahoo and the NFL themselves, recent years has also seen the emergence of weekly fantasy football with big prizes, such as Fan Duel and Draft Kings. So what makes fantasy football just so chuffing awesome?

The majority of leagues conduct a live draft – meaning you get to select your team in a real time format similar to the real NFL draft. Normally no money or salary cap is involved in seasonal leagues – just the luck of the draw and using your football knowledge to out-think your opponents. With live online drafts, most league providers will include live chat, allowing smack talk with other owners over snagging that dark horse one spot before them, or for their apparent idiocy at taking a misfiring dud for their team.

Some leagues will hold draft parties at a physical location – at times over a whole weekend – where participants attempt their best Jerry Jones or Ozzie Newsome impressions in person, often bringing swathes of draft notes that are all for nought after a few beers as they get flustered and accidentally take a kicker in the 4th round. 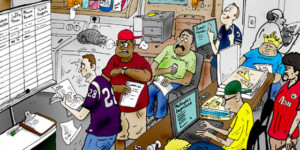 Fantasy football can be a stressful business

Fantasy football puts you in a head to head situation with another team owner every week. Your star running back had three TDs? Doesn’t matter – their stud receiver had four. You could have the week’s second highest score and lose. Every week, it’s all about you and the other guy/gal. This can lead to endless smack talk and over analysis. It puts the emphasis on getting your team selection absolutely right and it makes it excruciatingly painful when you lose by a point because you selected a guy with a first quarter fumble/injury combo while half your bench scored a touchdown.

Because each league divvies up the current NFL player pool between itself, there is no chance of two teams having the same player on it. This means choice of personnel is absolutely critical and owners will often feel a deep sense of attachment to players who achieve for them and a deep sense of resentment for players who habitually screw up.

For example I was in a league where after a few seasons one guy got so attached to Jason Witten based on past glories that he took him four rounds sooner than he should have, before J-Wit missed most of that season with various injuries. There were also rumours he carried pictures of Witten around in his wallet, next to those of his kids. Equally, one guy got so upset with DeSean Jackson one year that he destroyed his entire Michael Jackson CD collection, simply because they shared a surname. Bad times.

If you’re going to succeed at fantasy, you really need to know your stuff. Sure, there are some that get by with an auto-draft but that’s due to having relied on someone else (i.e. the website’s pundits’ rankings) knowing their stuff. Sometimes the difference between a championship and a losing season can be a rookie you took in the 13th round who turned out to be the next Randy Moss.

There is also an emphasis on adaptability throughout a fantasy season – with the ability to drop under-performing players and pick up free agents, as well as trading players with other team owners. Not only does this set up more trash talk for those unfortunate enough to jettison a stud or pick up a dud, it also can lead to taking long term views into dynasty leagues – those that allow you to keep players from one season to the next. Gronkowski out in week 2 with a blown ACL? Is it worth keeping a spot warm on your bench for the whole season in anticipation of the big man’s return to end zone-spiking dominance next year? Your call dude!

Making the right pick is crucial

Most people who take part in a fantasy league do so because they already like the NFL. Having a personal stake in games that may not involve your real life team raises the interest levels and makes the game more fun – or at times painful – to watch. When else are you going to care about whether a kicker can make a 55 yarder to get his team back within three scores of tying the game?

Fantasy football is on the face of it a simplistic concept that can be hugely frustrating and fun in equal measure. Players wait with baited breath for their annual drafts and like real players and owners enter the season with unbounded optimism and a certainty they’re going to win it all (OK, maybe with the exception of Browns and Lions fans). But like in Highlander, there can be only one. And even if you don’t come out on top, you’ll have a hell of a lot of fun along the way.