College football – a must-see for any fan

In the US, college football is huge. Packed stadiums, delirious student support and games played at a relentless pace – welcome to the NCAA.

If you grew up in the UK, college (or university) sporting events were normally confined to a local sports pitch. Maybe a few blokes and their dogs turned up to watch. Perhaps some classmates would be in attendance in order to mock your athletic shortcomings later in the student union bar. An inter-university rival game could merit a small stadium venue, attended by a couple of hundred if you were lucky. British fans therefore sometimes have difficulty getting their heads around the fact that it’s different in America – very different.

From the point of arrival at their college of choice, student athletes as young as 18 are subjected to enormous expectation and pressure. Institutions will fiercely compete with one another to recruit the best, offering scholarships and various other incentives to sign. The upper echelons of the college game are not merely a side-product to the main objective of education – they are front and centre. Every game is an audition for dozens of the best young football players in the land to cement a career in the sport they love. The ladder to stardom starts in college and the vast majority of NFL players are products of the NCAA draft system.

The upshot is performing in front of huge crowds of people – sometimes in excess of 100,000 per game – as well as national television audiences. The fans like to tailgate just as hard as their NFL counterparts and loyalty runs deep – often generations of the same family having attended and followed the same college for decades. There is a personal affinity to college fans that is perhaps more intense than fans of the pro teams and game day is a unique experience, varying from state to state, college to college, but generally matched in passion wherever you go.

Below are just a few of the college-mad destinations you should consider visiting if you’re serious about taking in all the sights, sounds and smells of America’s game. 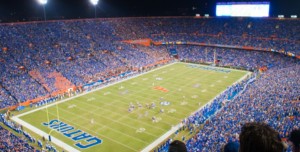 With a capacity of nearly 90,000, the University of Florida’s home, nicknamed ‘The Swamp’ is infamous for its raucous atmosphere and steep stands, allowing the baying crowd to be close to the players – encouraging if you’re a Gator, terrifying if you’re an opponent. A trip to a Florida game also puts you in great position to catch a pro game while there in a state readily served by flights from the UK. 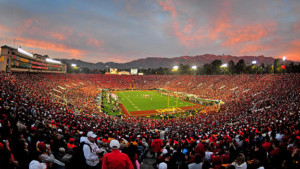 The Rose Bowl is one of the most historic and beautiful venues to catch a college football game. Set among the San Gabriel Mountains, the stadium was built in 1922 and in its time has hosted five Super Bowls and the 1994 World Cup Final, amongst other things. Also playing host to the Rose Bowl game in early January every year and holding just over 94,000 fans, this stadium is a must visit for a West Coast football trip.

There are 3 main reasons to see a Huskies game. 1) The view. 2) The noise. 3) The view. With a unique U-shaped design, this open ended stadium looks out onto Lake Washington and the Cascade Mountains. Add into the fact that Washington fans are LOUD (recording the highest ever noise level recorded at a college game) and the fact that you’re not far from another LOUD football experience with the Seahawks at Century Link Field, and a trip to this scenic part of America also lends itself to a fantastic football journey. 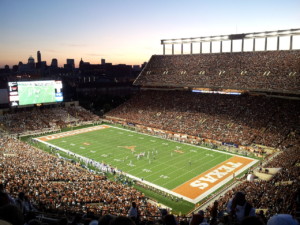 They like to do things bigger in Texas – just ask Jerry Jones. The Longhorns are no exception – boasting one of the largest stadiums in the World with a whopping 100,119 seating capacity. Texans also love their football and a trip to a Texas college football game guarantees noise, passion, good looking fans and lots and lots of orange. As well as putting you in a perfect mid-spot to see either a Cowboys or Texans game the next day. Perfect. 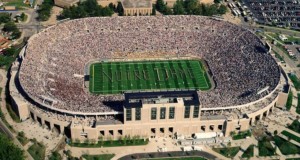 If you’ve seen the film Rudy, you’ll appreciate what Notre Dame football is about. Held in awe by many college fans, the South Bend stadium has played host to some of the most famous college games in history. Hosting just over 80,000 fans and packed to the rafters every week, a trip to a Notre Dame game is a unique experience and is also a great springboard to other NFL games as above or other college teams such as the Michigan Wolverines, around a 2 ½ hour drive away. 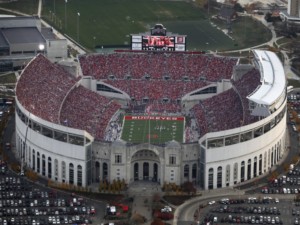 The Horseshoe is a monstrous stadium with an intensity to match. Its unique U shape (hence the name) makes it one of the most recognised venues in college football and its capacity of just over 104,000 makes it the third largest football stadium in the country. With the deafening screams of O-H-I-O echoing around and to be in spitting distance of several great cities and NFL teams, a trip to see the Buckeyes is a no-brainer for any fan.

Regarded by many as the finest place to watch college football in the United States, Tiger Stadium also is renowned for having perhaps the best atmosphere of any stadium, with ESPN calling it “the loudest stadium in the country.” As well as the volume, LSU games are attended by knowledgeable, passionate fans in one of the friendliest states you can wish to visit. With the opportunity of swinging by New Orleans – another incredible city to see a game in – a Louisiana football trip is almost too good an opportunity to miss.