Tailgating: The crucial ingredient to any American Football game

Adam Goldstein, author of “Tailgate to Heaven” and “The Tailgate Knight Rises”, fills us in on why you’ve GOT TO try tailgating for an authentic NFL experience.

Despite being an American football fan since I saw the Bears win the Superbowl, way back in 1985, I had never heard the term “Tailgating”, and i was dumbstruck when I found this thing of beauty at a Monday Night game in Arizona, where I traveled to see my beloved Bears play. It was here that I discovered that fans come to the games 4-5 hours  before kickoff  and in some cities the night before, in their cars, pick ups and motor homes. Fans in the stadiums are integrated (there are no “away” sections at NFL stadiums), thus it is the same in the car park where opposing fans park next to each other where they literally break bread together.

With the very open rules on open flames, most NFL teams allow fans to bring their own cooking gear, TV screens, satellite dishes , even in Detroit you can take your mobile hot tub to the lot, which on game day the lot  is called a Tailgate. Tailgaters are not allowed to sell their food or drink, so in turn people swap recipes, share stories, and generally have a mini festival before the game. Many tailgaters actually stay in the lot and watch the game on their flat screen TVs that they brought with them! Sounds nuts right? I didn’t believe it either and I thought that in Arizona this sort of thing only happened there because it was warm….I was very much mistaken. It happens all over the country no matter what the weather.

So to see it and literally taste it for myself, I sold my flat in London, left my job and told my girlfriend (now my wife) that I will see her in 17 weeks, as I set off to drive to see every NFL team play at home at least once during the regular season, thereby taking in a tailgate at every NFL team. I ate the most amazing food, such as venison, bear, raccoon, lobster, all made right there on what is called The Black Top. Not only was the food great, but every fan base was incredibly friendly. The Tailgaters change their menu each week depending on who they are playing against and many have NFL themed buses.

A lot of people ask for advice going to a game, and I say the same thing every time, go four hours before kickoff and mingle among the tailgate,  and if it is a game day, then watch the later games with the tailgaters out in the lots. The tailgate makes going to a football game a whole day event and as you know the NFL is very family friendly so are the tailgates, so there is no reason to not check them out. Though be careful you could be having so much fun at the tailgate, that you forget what time it is and miss kick off.

Having written two books on the subject, Adam Goldstein is the foremost authority for UK fans on the great American art of tailgating – something that’s included with each one of our packages at Touchdown Trips. For more about his record breaking trip, head over to Amazon and give his book a try: “Tailgate To Heaven“, as well as his fantastic follow up book about his 2009 travels when he lived as a Tailgater in an American school bus and cooked food at football games, called “The Tailgate Knight Rises“. You can find Adam on twitter @tailgateknight 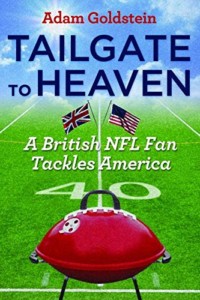