I suppose my view of American Football was like a lot of my fellow Englishmen who have never really watched the game before; “A bunch of fat blokes running into each other and stopping every 10 seconds isn’t it? Wearing pads too – you don’t see the rugby lads in pads. And adverts….so many adverts.” 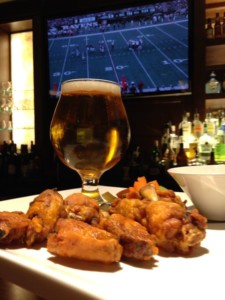 It was Baltimore and it was 2001. I’d moved to America for work a few months earlier and had spent the summer living near DC – moving to Charm City in September of that year. I had a vague understanding that there was a team called the Ravens that played there, who had appeared in the Super Bowl recently and may or may not have won it (I hadn’t checked the score). But as a 22 year old I was more interested in seeing what else Baltimore had to offer – mainly on the social scene. Expertly using my English accent to sucker the locals into thinking I was funnier and more intelligent than I was, I soon made a few friends willing to show me around town, experiencing the delights of the Inner Harbor and Fell’s Point, Natty Boh beer and Old Bay steamed crabs (which I still heartily recommend, by the way).

It wasn’t long before one of my new found friends mentioned that I should join them “to watch the game this Sunday” at a bar in my neighbourhood. Never having needed much persuading to go to the pub to watch sport, I readily agreed, anticipating an afternoon spent continuing my insistence that it was pronounced ‘aluminium’, eating buffalo wings (a food from the Gods which I’d formed an instant addiction to and yes, I still have a problem), sinking a few pitchers of that ‘Lite’ beer they kept forcing on me and occasionally saying “good score” when they got excited at the action on the box.

I rocked up at 12.45 and the place was already heaving. I locate my friends who have scouted out a prime seat right in front of the 60 inch projection TV, bedecked in their matching purple jerseys with names on the back. “Who the hell is Grrrrback?” I ask naively. “It’s Elvis Grbac – he’s our Quarterback. Gonna take us to another Super Bowl” I get, slightly impatiently, in response. “Oh, OK”, I reply meekly, pouring myself a glass of Lite stuff  while grasping with the concept that people still name their kids Elvis. The sense of nervous excitement in the place peaked my curiosity as to what the big deal was and told me to perhaps hold back on the ‘big girls blouses’ comments for a little while. The CBS music blares out, the image of the field comes into view and a “come on Ravens” roar echoes around the bar. Everyone is REALLY into this, so I decide to focus on the screen and see what the hell everyone’s so excited about.

It’s just over three hours later and I’m high-fiving strangers following a win for the boys in Purple. People who I’ve never spoken to before are thrusting shots of something with a name I can’t repeat here into my hand. Men are bear hugging each other (I later came to realise this happens quite a lot compared to the staunch handshakes I was used to). I’m not quite sure what has just occurred other than it was good – very good. The locals had been quick to answer my incessant questions throughout as to why the ref threw a little flag there, and why they’ve decided to punt it there. My understanding of the basic strategy of this amazing game has increased about 5000% and I’ve suddenly realised what the hell I’ve been missing out on for 22 years. There were fearsome hits, powerful runs, acrobatic catches, fumbles (I laughed when told that’s what it was called, poor Elvis) and touchdowns. Ah, a touchdown – the spontaneous roar from the patrons as a catch was snagged in the endzone made the hairs on my neck stand up and realise I wanted more of this.

So I did get more of this. As much as I enjoyed the camaraderie in the bar, I wanted to experience the sights, sounds and smells of the game in person so the next year got season tickets which I still own to this day. I spent my spare time on football message boards complaining about the quarterback or the offensive line or the officiating or the coaching. I started defending the sport to my ignorant friends back home and tried to convert any that came to visit by taking them to a game and then banging on for hours about how damn tactical this great game was.

Now, 15 years later and back in England, I still get that slightly sick feeling in my stomach and surge of adrenaline as 1pm EST approaches, filled with hope, dread, expectation and cynicism, as I wait for another autumn Sunday’s entertainment to grip me hard and not let me go.  I may not be at the bar anymore, but I can still taste those wings. I opt for the full-fat beer these days though.