There’s a reason why at Touchdown Trips we bang on about tailgating before an NFL game. Simply put, without one you’re not experiencing a true game day. If you’re going to splurge on a trip to the New World to see your favourite team in its natural environment, then immersion in the pre-game fan experience is a must. And each fan base in each city do things a little differently. In the first of a series of blogs, we’re going to look at all 32 teams by division and the tailgates we offer with them. This week it’s the division of old school football and blue collar tailgating – the AFC North. 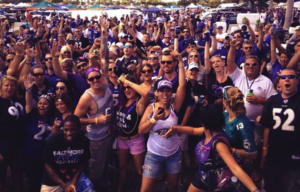 Prepare to get rowdy in Charm City

Tailgate Lowdown – Baltimore is one of the best cities in the NFL for tailgating. M&T Bank Stadium sits within easy reach of downtown and the Inner Harbor, meaning fans can stroll along to the adjoining parking lots at their leisure. The city’s fans have long had a penchant for getting things going early, stretching back to the Colts’ time. Baltimore is famed for its crabs, and you’ll often find crabcakes, crab dip and Maryland crab soup at a Ravens tailgate.

TDT Tailgate – Our Ravens-supporting customers are invited to Lot O at M&T Bank Stadium for one of the biggest tailgate parties in Charm City. This 3 ½-hour tailgate, located at 700 West Ostend Street, is a one-of-a-kind, all-inclusive experience where veteran and new tailgaters alike can mix and mingle for a great purple pregame experience.

Fans attending enjoy an open bar, delicious BBQ food including ¼ lb hamburgers, hot dogs, BBQ chicken, baked ziti, potato salad, coleslaw and desserts. Also included are tailgate games, music and more in a private space complete with toilets and located in a 30-foot by 30-foot tent with bar height tables – useful in the event of a bit of rain. Live music comes from DJ Buddha spinning the tunes while the games include tailgate staples such as cornhole, flip cup and beer pong. The Bud Light Build-A-Bar, complete with four TVs, is also accessible, making this a complete tailgate experience that’ll get you ready to scream Deeee-feeeense when you get to your seats! 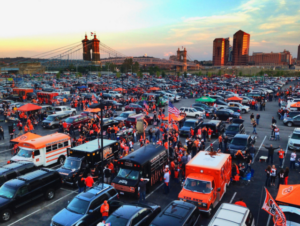 Tailgate Lowdown – Like the other cities in this old school division, Cincy has a stadium within spitting distance of downtown and the locals like to party before a game. Sitting next to the Ohio River, Paul Brown stadium offers plenty of parking lot space for those in orange and black to get in the gameday mood.

TDT Tailgate – Our private tailgate party is an absolute cracker, run by Bengals fans who have been doing this for years. Gather together with a group of super fans who are more like family, as every game day, they join forces in Lot 1 of Paul Brown Stadium to play games, eat delicious food, meet other fans and special guests and party at the best Who Dey tailgate there is.

Each game day is a different experience, as the cuisine is themed each week to the Bengals’ opponent. Soft drinks, water, a beer keg and other mixed drinks are flowing each game day, as is the music, tailgate games, raffles (drawn an hour before kick-off) and rounds of shots for everyone in attendance (you can even keep your cup as a keepsake!). If there’s one thing this tailgate is known for, it is their reputation for being the best pregame tailgate for the Orange & Black – a perfect warm up for screaming on the Bengals to victory. Tailgate Lowdown – Despite years of disappointment since the reformation of their franchise in 1999, Browns fans have never lost their reputation as one of the most dedicated tailgating fan bases in the NFL. Maybe it’s because of the disappointment that they make up for it with stellar pre-game celebrations?! Either way, a true tailgate in Cleveland is essential for any visiting Dawg before entering First Energy Stadium.

TDT Tailgate – At Touchdown Trips we feature the Cleveland Browns’ largest tailgate extravaganza every home game. In conjunction with 92.3 The Fan in Cleveland, who broadcasts their pregame show live on location, this tailgate party is a can’t-miss for any fan of the home or visiting team. Located in the Barley House parking lot on W. 6th Street, this private pregame party features food, drinks and entertainment by the bucket full.

This group of die-hard orange and brown fans keep things going every Sunday with a customised fan mobile, two full-service bars, music from a DJ, live music performances, a jumbotron television, food from local eateries and a custom T-shirt stand. With several official sponsors and a large squad of faithful followers, this is one of the most sought-after tailgates in the NFL community. 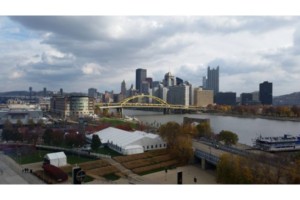 Tailgate Lowdown – Like the rest of their AFC North brethren, Steelers fans take pride in their pre-game festivities – where terrible towels will be waved and chants of ‘here we go Steelers’ will echo out. Sitting at the north end of Pittsburgh over the river from downtown, Heinz Field attracts some early tailgaters around the stadium, while others like to party in Pitt before crossing the river to Heinz. While others like to pre-game ON the river itself…

TDT Tailgate – One of the most unique tailgates in the entire NFL takes place three hours before each Pittsburgh Steelers home game. Rather than a tailgate, in Pittsburgh we send our fans on a sailgate party! Boarding a yacht, you sail the “Three Rivers” of Pittsburgh on board this luxury boat before heading into Heinz Field for the Steelers’ latest matchup.

While on board, guests will get to enjoy unlimited domestic beer and wine (along with a cash bar), a buffet catered meal, flat screen TVs and an autograph/photo session with a different Steelers’ alum each game. And with a limited number of spots available each game, this one-of-a-kind experience promises to be great for everyone on board, as well as delivering you right outside Heinz Field in time for kick off!

For more details on these and other teams’ tailgates included in our NFL packages, check out https://touchdowntrips.com/teams-and-cities/ 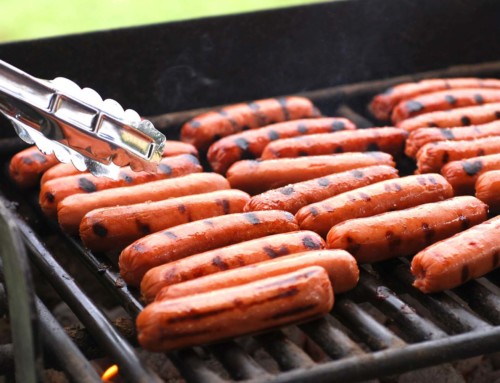 So what’s this tailgating thing anyway?